INTRODUCTION
The Blues Breaker amp is one of Marshall’s Vintage Reissue range which offers faithful reproductions of the originals – in this case a 1962 model.
FEATURES
The amp has two channels but no footswitch option so control over distortion is performed by backing off the guitar’s volume control. EQ is provided by a very simple treble/midde/bass sytem, each contolled by a rotary knob. The 2 Celestion12″ speakers are clear and are rattle free. The tremolo effect is controlled by a simple on/off footswitch.

WHAT’S IT LIKE TO PLAY?
It’s only rated at 30 watts RMS but it sounds a lot louder. It’s feasible to use this amp for country, pop or jazz but it really comes into it’s own when used at maximum distortion with a high output guitar such as a Gibson Les Paul, ES-335 or SG. What you get is a classic sound that has helped to define rock music for nearly 50 years. What you don’t get so easliy is a well defined clean sound.
CONCLUSION
If you play rock and blues guitar, or perhaps want that classic Clapton ‘woman’ tone, then this amp should be a serious contender for you money. With a street price of around £1,200 it’s certainly not cheap but it does deliver a particular sound that you’ll struggle to find elsewhere. On the other hand, if it’s versatility you want there are other options available.
Specification:
Output: 30W RMS
Speakers: 2 – 12″ 25W Celestion Greenback speakers
Valve: rectifier
Footswitchable tremolo effectFurther information: Marshall 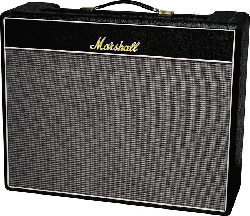